How to Spend a Day/Weekend in Sydney – Freediving

17 Jun How to Spend a Day/Weekend in Sydney – Freediving

Posted at 01:46h in Freediving by DeepWeekFreediving 0 Comments
0 Likes 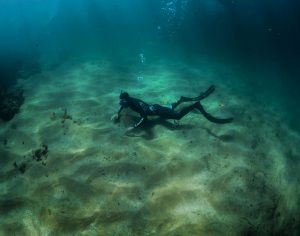 How to Spend a Day/Weekend in Sydney – Freediving

Freediving is an excellent way to explore the deep blue sea and beaches around Sydney without the constraints of scuba diving equipment. You don’t have to be capable of diving deep or long breath holds in order to enjoy freediving in Sydney. Anyone with a reasonable level fitness can do it.

Sydney boasts many excellent shore diving sites suitable for freediving and snorkelling. The more you practice freediving in Sydney, the deeper you’ll be able to go and the further you’ll be able to swim without surfacing. However, the most interesting areas of natural beauty beneath the waves accessible while freediving in Sydney are only between 2 – 6 metres down. With only a little practice, anyone can learn how to enjoy Sydney freediving. You’ll just have to make sure you have a mask, snorkel and a pair of fins and you’ll be ready to go!

The best-known Sydney freediving site is Shelly Beach, which is found in Cabbage Tree Bay Aquatic Reserve in Manly. This is the only marine-protected area in Sydney and a location where every Sydney freediver has the opportunity to come face-to-face with over 200 species of fish and other aquatic wildlife, such as dolphins, eagle rays, and turtles. Even on a bad day, you should encounter at least 25 different marine species.

Shelly Beach offers 2 dive sites, both relatively shallow and excellent for beginners wishing to increase their confidence while exploring fascinating underwater environments. Off the north side of the beach, the seabed is composed of boulders and patches of sand. The visibility is best there. Off the south side, the seabed is rocky and kelpy. Most of the interesting areas are found at depths of around 6 metres and the maximum depth is 10 metres.

As soon as you dive down deep, expect to find eastern blue grouper following you around like ducklings follow a duck. Maori wrasse and snake-skin wrasse are also common. On the sandy areas, watch out for common stingarees and fiddler rays.

As you head out from the pool, the seabed changes from sand to shell grit with sea weed patches. A natural wall of rocks close to the shore is as shallow as 2 metres at low tide. Seahorse have been sighted in a sea weed patch near the pool. Red Morwong are found here as well as yellowtail scad and red rock cod hidden among the rocks.

Kurnell is on the south side of Botany Bay and is also part of Botany Bay National Park. There are 2 dive sites in Kurnell: Kurnell Steps and Kurnell Monument. The depth is between 3 metres and 7 metres, but most of the interesting stuff is found at shallow depths. Because you won’t be diving too deep, there’s lots of light. This makes Kurnell a fantastic place to check out all the colorful marine animals.

Expect to see lots of colorful aquatic creatures hidden in amongst the crevices and kelp. Watch out for seaperch, glossodoris, and hawkfish. On the negative side, because the seabed is so exposed to light, the critters like to hide away. On the positive side, you’re not diving too deep so you’ll have time to search them out.

This small islet reached by a footbridge is found on the northern side of the channel into Botany Bay and is within Botany Bay National Park. There are 2 shallow dive sites to the right and left of the footbridge linking Bare Island to the mainland. The left side is considered the better site for visibility and interesting marine life but can become tricky in a southerly swell. The maximum depth of the dive is 13 metres, but most free divers aim for the boulders and soft corals found at a depth of around 6 metres.

The sea around the islet is noted for the soft coral and abundance of beautiful sea stars. Pygmy pipefish, red Indian fish, anglerfish, and sea horses are also common. Keep your eyes peeled for the well-camouflaged endemic Bare Island anglerfish which looks just like an algae-covered sponge. If history interests you, the island also houses a historic coastal defense with a fort and tunnels.

Chowder Bay at Clifton Gardens is an inshore muck dive on the north shore of Sydney Harbour. The site is shallow with the muddy seabed mostly between 3 and 6 metres, though it drops to 10 metres at its deepest. Muck dives often suffer from poor visibility, and Chowder Bay is no exception. However, muck dives can provide the opportunity to see rare aquatic species that hide in the mud or inside human-produced trash discarded into the water.

The dive site is renowned for its decorator crabs and various species of seahorse. Expect also to see anglerfish, cuttlefish, goatfish, tiger pipefish, and frogfish. The dive follows the outline of a jetty that stretches out into Chowder Bay, and most of the interesting marine species are found around the pilings. On the silt and sand near the jetty, you can occasionally find octopi. They like shiny objects, and you can tempt them from hiding with the right bait.

Camp Cove is found in Sydney Harbour National Park directly east across the harbor from Chowder Bay. The best diving area is found near a rock face with the number #4 displayed to set the motorboat speed limit to 4 knots. Although this is an interesting area to dive, you must beware of the boats passing through the cove.

The seabed varies is around 6 metres deep. Directly under the #4 you can dive down through Moorish idol, butterflyfish, and porcupinefish. Headed out into the sea, watch out for swimmer crab in the sand and common stingarees. A little way out is a reef under which you can find snakeskin wrasse, cuttlefish, silver bream, pygmy leatherjackets, and grubfish.

Sorry, the comment form is closed at this time.